The Practice Of Forgiveness

Last Wednesday I attended the kickoff event for a new organization called Peace Now! and I got a chance to see the trailer for a documentary called Beyond Right and Wrong – Stories of Justice and Forgiveness by filmmaker Rekha Singh. The film follows victims of terrible violence – lone survivors of genocide of entire communities, children of assassinated politicians and more – as they are brought together with their oppressors and their families’ murderers – for the purpose of Forgiveness. 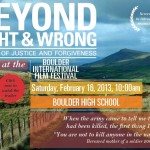 In every case, the victims of violence started out with a predictable set of thoughts and emotions: “I am angry, I am hurt, I am sad all the time, I am filled with the spirit of vengeance – and I cannot even think about letting any of that go. I want Retribution! I want revenge.” But Oh – what a transformation takes place when someone chooses the path of forgiveness instead. In the film we see both victims and victimizers begin to finally see each other as human beings. They weep together, they express the rawness of their pain – and finally they replace the anger and the shame, the righteousness and the defensiveness, with connection, understanding and even love. New lives are made possible for the individuals, and new futures for entire nations.

During the panel discussion that took place after the movie, a lot of people were talking about “the act of forgiveness.” But here’s the thing: forgiveness is not actually a singular event or one-time action. Forgiveness is not like a light switch that you can switch over to find peace and let go of hatred. Forgiveness must be an on-going process. It’s a practice that you have to re-establish every day.

In traditional Hawaiian culture there is a ritual called Ho’oponopono. It’s usually translated as a ritual of reconciliation and forgiveness. But another possible way of translating ho’oponopono is “a return to harmony.”

Ho’oponopono is a ritual that sometimes goes on for days or weeks, can involve an entire clan (not just two individuals) and might be repeated annually! Because the LOSS of Flow and Balance – the loss of pono – is thought to be the cause of illnesses, of stress and strife, of violence, of disconnection, of the breakdown of families and the loss of fortune. Without forgiveness, there is no Pono – there is no harmony. Anger, resentments, righteousness and desire for retribution keep you stuck in an out-of-control cycle of unconscious reactions. These emotions and reactions are deadly Flow Killers.

Forgiveness, however, is a Flow Reviver.

On the days when it feels like nothing is working, and the world is throwing stuff at you faster than you can fend it off, and the Qi just isn’t flowing, try this: there are places, people and events in your life that need forgiveness. And you forgive not necessarily to benefit them… the forgiveness is for YOU. When you make forgiveness a regular practice you get better at it. It becomes more natural and authentic, the same way your Taiji becomes more fluid and effortless the more you practice. Once is not enough – it takes repetition and rehearsal. In other words, forgiveness is not a singular act. It is an on-going habit – a quality to make part of your lifestyle.